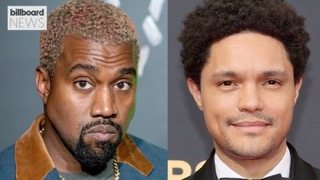 West is not invited to appear at April’s Grammys after recent “concerning online behaviour.”

Despite his belief in consequences, Trevor Noah also believes in conversation. The Daily Show host defended Ye (formerly known as Kanye West) on Sunday (March 20), arguing that the rapper should not be written off without dialogue because of recent online activity.

“I said counsel Kanye not cancel Kanye,” Noah tweeted over the weekend.

According to reports, West’s team received a call on Friday evening notifying them that Ye’s performance at the upcoming 2022 Grammy Awards had been postponed due to his “concerning online behaviour.”

The team of Kanye West received a call on Friday evening informing him that the upcoming awards show on April 3 had cancelled West’s participation. Ye is nominated five times at the awards show, including for the album of the year for Donda. The Recording Academy did not announce Kanye as one of the first performers ahead of the event.

A West representative declined to confirm whether he would still attend or be invited to the show at the MGM Grand Garden Arena in Las Vegas. Noah is hosting this year’s show, and an unnamed source close to the comedian told CNN that Trevor had nothing to do with West being disinvited.

On March 16, West received a temporary suspension from Instagram for posting an offensive slur that targeted The Daily Show host. The Grammy-winning musician was prevented from posting, commenting or sending direct messages during the suspension. Ye’s Instagram post, since deleted by Instagram, replaced lyrics to “Kumbaya” with a racial epithet based on a minstrel character.

During a Tuesday segment of The Daily Show, Noah addressed West’s online harassment of both his ex-wife Kim Kardashian and her boyfriend, Saturday Night Live cast member Pete Davidson, calling it “terrifying to watch.” Before West’s post was removed, Noah responded, saying Ye should “know the difference between that and fighting your family.”

“If you’re just joking about it all and I’m an idiot for caring, then so be it. But I’d rather be the idiot who spoke up,” Noah concluded his comment.