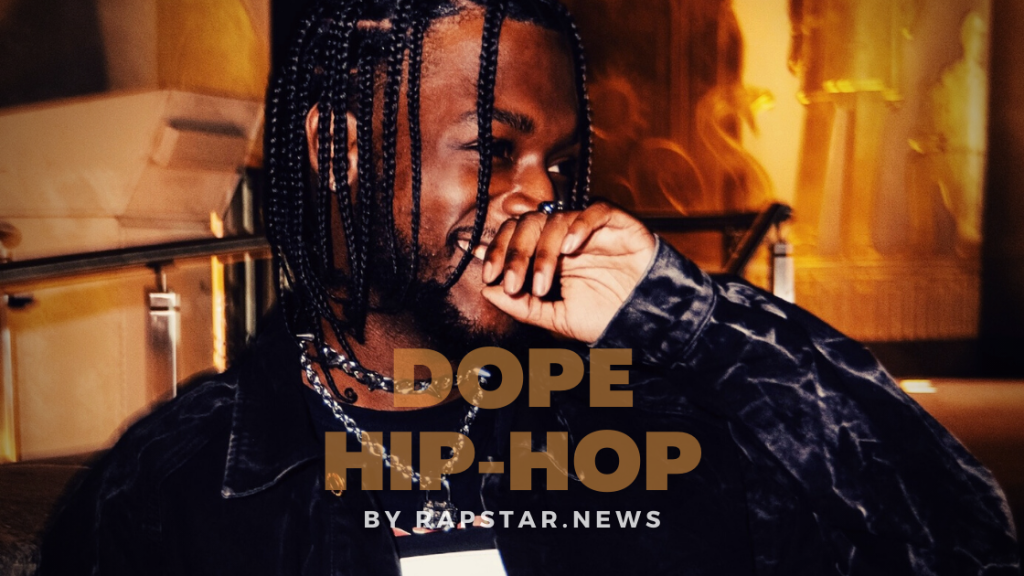 We don’t think any of us thought we’d be hearing this much indie hip-hop in 2022. We’re living in a time when new (and some old) indie rappers are out here changing the game.

This isn’t 1996 when artists like Nas, Mobb Deep, and The Notorious BIG were the most popular rappers. Times have changed and what was once overlooked can now compete with the likes of Macklemore, Drake, and Nicky Minaj.

There have been a lot of changes in the past few years, so we must also change, and look outside. We know you’re a hip-hop head, but have some of your favourite rappers been giving you the same ol’ stuff?

Think about it. Do you need more beats that make your head nod and also make sense? Let’s take a look at the outside world, why not?

That’s why we’ve put together this list of dope hip-hop tracks you’re missing right now from indie artists. These songs will be added to our personal playlist as well, for sure.

In our weekly PopHits.Co production meetings, we search the internet for dope new releases in indie hip-hop and other genres. The process is always the same. The fact that we are good at it led to us getting featured on some of the more up-and-coming music websites.

However, since we started providing our readers with this “dope indie hip-hop” every week, they’ve started coming back next week. As a result, we concluded that it is working. We’re now at the new tipping point for indie hip-hop from around the world.

You can listen to our full playlist which contains the artists’ music, and know more about the artists by scrolling down the page.

A-LEAN is a Romanian hip-hop artist who has recently released his new single, Dialogue. The song is a political commentary on the state of Ukraine and the war in Europe.

A-Lean’s voice is strong, but he also sings in English and Romanian. It’s a true blend of European influences and styles, which makes it hard to pin down exactly what his sound is. We just know it’s a great gangsta rap style song and we like it.

The song itself is perfect for a soundtrack as you’re driving around town or on your way to work—it’s upbeat enough to keep your spirits up but not so fast that it distracts you from what’s happening around you.

There is no doubt that despite the rapper’s foreign heritage, he is able to express himself well in English.

If you like hip-hop and want an artist who can sing from the heart about important issues (like Ukraine’s war), then check out A-LEAN and follow the artist on Spotify!

1punch, by IREQ SAVAGE is a rap rock single that features metal punk. The artist is based in Orlando, There is no doubt about the fact that he is a creative person, as shown by his work combining different genres of music that are completely unrelated to each other.

The song starts with a rap part but with a punk rock style voice, and then moves into the more rocky part. The artist uses his voice for rapping and screaming at the same time.

It’s a short song, less than 2 minutes. His lyrics are generally about life tragedies. They are also about questioning society in some way: “What they got to say?”.

This is a good song for fans of hip-hop and rock music who like artists who use more their voices to make music rather than instruments.

It is also good for those who like USA rap culture because it has been recorded in the United States by an American artist. So check it out and follow the artist on Spotify!

The EP B4 by Brooklyn-based artist BREON S.Y.N.D.E.L is a must-listen for anyone who enjoys alternative hip-hop with a contemporary emo rap vibe.

Eight songs make up the EP with a variety of features that keep it from being boring at all. All of the songs are about life experiences, relationships and loss, but with a modern twist that makes them stand out from other artists in this genre.

BREON S.Y.N.D.E.L has great musical talent, which he puts on display throughout the entire EP.

He also has an incredible voice, which shines through in every song on this album – from the track which seems he sings to himself in the mirror while talking to a girl “K.O.H.”, to the one entitled over our breakfast full of autotune source “B.E.C BaconEggAndCheese”.

If you like what you hear here and got curious, be sure to check out his other work, watch his music video and follow the artist on Spotify!

If you’re looking for a great new hip-hop single that mixes your favourite genres together into something truly unique, look no further than DESH.DUBS‘ new single Dubstar.

The Netherlands-based artist has been making waves in the indie world with his blend of dub and afro reggae, but he’s also got some drill, grime, and trap influences.

This is a song that will appeal to fans of both American and European hip-hop—and it’s so catchy you’ll be singing along before you know it!

It’s not just the music that makes this track stand out; the vocals are pretty stellar too. The entire song feels like an anthem: upbeat, edgy, and super catchy.

If you’re looking for something new to add to your playlist or just want to hear something cool at a party, this is definitely worth checking out, and don’t forget to follow the artist on Spotify!

MC Nemesis is a hip-hop artist from Los Angeles. She’s been making waves on the indie scene, and her new single Tigress is a perfect example of why she’s so popular.

The song features classic boom bap beats that are sure to bring back memories of the golden era of hip-hop, her music is influenced by musical legends like Rakim, Lauryn Hill, Busta Rhymes, Wu Tang Clan, KRS One, Missy Elliot

Nemesis’ voice has an undeniable power—she sounds like she could take over any stage with just her voice and a mic. The chorus is catchy and easy to sing along with, but the verses pack a punch with complex lyrics about a fearless spiritual form of a ‘lone huntress’, the Tigress.

This song is perfect for any time you need some encouragement or when you just want to sing along with something positive, check it out and follow the artist on Spotify!

The debut EP from RICHARD, A Lot On My Mind: My Way, is a collection of chillwave-inspired hip-hop with an air of political rap and dream pop elements. The artist’s voice is auto-tuned and there are several EDM features.

Richard is based in St. Louis, Missouri, and his music reflects his hometown’s culture and history. His hip-hop chillwave sound is perfect for a lazy summer afternoon spent soaking up some rays with friends.

The dream pop elements of the EP add an extra layer of depth and emotion to each song, making it feel like you’re listening from inside someone else’s head rather than just hearing some beats over some lyrics.

It reminds me of some of my favourite rappers like Kendrick Lamar, who are always talking about real issues affecting people in our communities every day (and not just celebrities).

Our favourite song “Dassa Rack” features an EDM-inspired instrumental that brings everything together nicely at the end of the EP. Check it out and follow the artist on Spotify to support his art.

If you’re looking for a new anthem to get you through the rest of the week, this hip-hop single by PROKLAIM is the right track for you. The Namibian artist Sparrow is an inspiring, trap-influenced track that will make you want to get up and dance.

The song starts off with a smooth beat and a catchy chorus that makes it easy to sing along with. It also has an uplifting message Tupac style: “I don’t wanna sound the same”.

This is undoubtedly something we can all relate to—so when you hear it in the song, In a way, it’s almost as if the artist is speaking directly to you and the rest of the hip-hop community, which often relies on generic lyrics and lacks proper content.

Sparrow is definitely one of those songs that will help you get through your day with a smile on your face, it’s progressive and will make you move your body. Check it out and follow the artist on Spotify!

RICK SMOOVE has a new single out and it’s going to be your favourite thing in the world. Lost is an indie hip-hop track with a pop feel, featuring vocals from both RICK and a female backing vocalist.

The beats are super groovy, and the song is great for dancing or just chilling out on the weekend. This track’s a catchy pop-hop track with R&B-style vocals and a great beat. We really loved it!

As mentioned, there are both male and female featured vocals, both of which are impressive, and both are smooth and soulful – you’ll be singing along with these songs within minutes!

If you’re looking for something new to listen to, check out Lost by RICK SMOOVE! It’ll be the best decision you make all day. This is definitely worth checking out, so do yourself a favour and follow the artist on Spotify.

9) DAX – Searching For A Reason

This single from independent artist DAX is a must-listen for anyone who loves hip-hop, R&B, soul, gospel or easy-listening music.

The song is super catchy and has a relaxed vibe—it’s great for when you’re driving home from work or going on a long drive with friends.

It also has a hint of emo rap, which gives it an edge that makes it a little different from other songs in its genre, especially because of the lyrics’ topic: Life purpose, religion, praying and spirituality.

DAX is based out of Wichita, Kansas and he has been making music and releasing it on Spotify since 2017. The rapper is very experient on the journey, with a portfolio that has songs with over 64, 61, 48, and 35 million plays on Spotify alone. The total of plays is above 300 million.

If you’re looking for something new and impressive to listen to this weekend, check out Searching For A Reason by DAX, watch his music video and make sure you follow him on Spotify!

Son Silva is an experimental hip-hop artist based in London. His music is a mixture of grime, hip-hop, dark wave, UK-influenced rap style and progressive beats with an emphasis on European culture.

The lyrics are written by Son Silva himself and are deeply personal and introspective, “Bastion” is a melodic, uptempo song about demanding peace, comfort, and joy from a world that denies them.

In the midst of the climate crisis, the song explores a lover’s anxieties about their futures, fighting people and establishments that misunderstand them.

Son Silva simply waxes poetic and invokes strong images of “scarlet letters sent to kill a king,” and “being the blade and the wound/the victim and executioner.” There is an evocative quality to the song both in terms of production and songwriting.

Check out his latest single “Bastion” and follow him on Spotify!